Discovery's Planet Green will be airing What's On Your Plate with their audience again Saturday, March 27th at 10pm and Sunday, March 28th at 2pm. Check out the handy toolkit for watching with your family and friends. Invite your friends over! Cook together! Eat together! Enjoy!
Posted by Jimmy's No 43 at 10:09 AM 4 comments:

The second installment of Hungry Filmmakers was an evening to remember. We have some pictures to prove it! 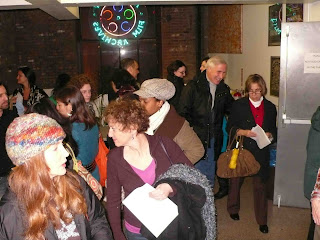 Fueled by curiosity, concern, support for Hungry Filmmakers, and maybe even Cathy Erway's feature of Hungry Filmmakers on her Heritage Radio Network Show- Let's Eat In or her mention of it on The Huffington Post, eager filmgoers filed in to watch excerpts from documentaries about an urgent cause- our food system. Here are a few brief descriptions:

End of The Line: A wake-up call to the world about the catastrophic impact of overfishing on our oceans: "Imagine the world without fish."

Fly On The Wall: Artist Marna Chester's one-woman mission to convince Brooklyn shop owners to let her hang a poster she hopes will promote healthy eating. An experiment in empowerment.

Fresh: Ana Joanes celebrates the farmers who are pioneering alternatives to industrial agriculture: "If Food Inc. was your wake up call, Fresh, The Movie, is your call to action"...

Mad Cow Investigator: Nancye Good tells the story of Janet Skarbek, a New Jersey woman who stumbled upon evidence of a mad cow disease outbreak in her community and was so outraged by what she learned that she became a muckraker a la Erin Brokovich and Upton Sinclair. 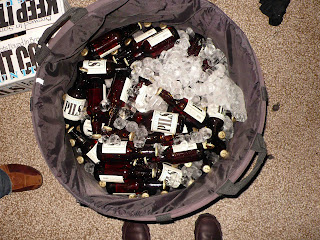 A post-show discussion, a petition for a garden at City Hall, pizza from Slice, beer from Lagunitas... Hungry Filmgoers had a full evening. But the star attraction was clearly the films. 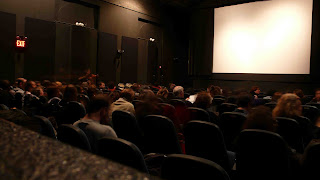 More pictures are on their way. There are links for all of our featured documentaries in our link section on the sidebar. Check back here to see more pictures and to find out about the next Hungry Filmmakers.
Posted by Jimmy's No 43 at 3:49 AM No comments: